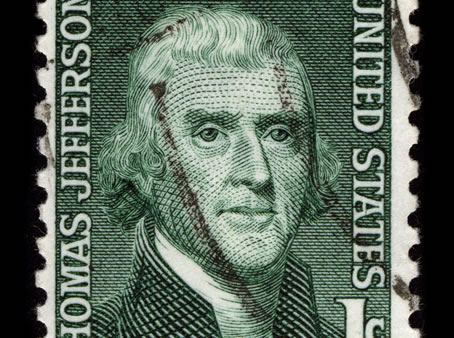 The following article details quite a bit about Thomas Jefferson’s dental health, and how good it was overall! Read on, and enjoy! Thanks for visiting Saddle Rock Pediatric Dentistry of Aurora, CO.

In 1808, Frances Few, an acquaintance of the then 65-year-old Thomas Jefferson, wrote that the president was a “tall thin man very dignified in his appearance.” She particularly noted “his teeth are good he shews [sic] but little of them when he laughs.”

Jefferson, while best known for his contribution to the writing of the Declaration of Independence and for effectively doubling the size of the U.S. with the Louisiana Purchase, was a prodigious reader and writer and accomplished in many disciplines. President John F. Kennedy paid the following tribute to his predecessor at a 1962 White House dinner honoring Noble Prize winners from the Western Hemisphere: “I think this is the most extraordinary collection of talent, of human knowledge, that has ever been gathered together at the White House, with the possible exception of when Thomas Jefferson dined alone.”

In 1824, describing the then 81-year-old Jefferson, Daniel Webster wrote, “His mouth is well formed and still filled with teeth; it is strongly compressed, bearing an expression of contentment and benevolence.” That same year Jefferson wrote to Charles Willson Peale stating, “I am particularly happy not needing your porcelain teeth. I have lost only one [tooth] by age, the rest continuing sound.” Peale and Jefferson had been friends for years — both part of the intellectual elite of the time. Like Jefferson, Peale was a renaissance man of many arts, trades, and interests, one of which was the development and refinement of porcelain artificial teeth, which were replacing ivory, animal, and human teeth for dentures.

Jefferson was fastidious about his health. Documents that have survived, mostly archived at the Library of Congress, reflect his dental care. His journals list eight dental visits between 1772 at age 29 and 1824 at age 81. Whether all were for himself is unknown. Other dental needs he noted in his journals and letters included the purchase of toothpicks and toothbrushes, the latter with “the hair neither too strong nor too weak, without spunges [sic].”

In the late 1770s through the 1800s, pig, horse, and badger hair were used for bristles on toothbrushes. Another common method of teeth cleaning in the era was placing soot and salt on a rag or sponge and rubbing it on the teeth. Jefferson also recorded the purchase of “a silver toothpick case, the smallest possible,” in 1785 while he was minister to France.

Jefferson experienced only two serious dental problems in his life that are known. In December 1807 at age 64, he wrote his daughter Martha: “I was taken with a toothache about five days ago, which brought on a very large and hard swelling of the face, and that produced a fever which left me last night.” The swelling had subsided, but he was unsure if “it will terminate with suppuration.” Seven days later, he wrote another letter to Martha in which he disclosed “the swelling abated through the whole face, but still remains in a knot as big as a pigeon’s egg, over the diseased tooth, which has now been suppurating so long that the Doctor thinks he shall have to extract the tooth (altho’ perfectly sound) to prevent a caries of the bone.”