Secrets of the Narwhal Tusk 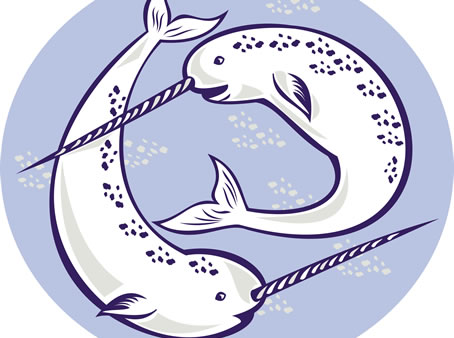 Did you know that the tusks that protrude from narwhals are actually teeth? Read on to learn about one dentist’s pursuit of knowledge about the narwhal, and what their tusks are used for. Thanks for visiting us at Saddle Rock Pediatric Dentistry. Enjoy reading!

To Martin Nweeia, the narwhal — a mysterious whale with an off-center tusk — is much more interesting than the mythical unicorn.

Now, eight years after he described the narwhal’s distinctive tusk as a sensory organ, the fascinating creature is coming into focus. Nweeia and his colleagues have mapped a sensory pathway between that spiral tooth and the narwhal brain, along the way showing how the animal may use its tusk to suss out its environment.

A practicing dentist in Connecticut and a clinical instructor in the Department of Restorative Dentistry and Biomaterials Sciences at the Harvard School of Dental Medicine (HSDM), Nweeia calls himself “just a curious kid” whose interest in dental anthropology — teeth in people across evolutionary history — spurred him to look at, for example, the elephant tusk and other variants of teeth in animals. But for more than a dozen years he has been chasing narwhals in their native habitat halfway between the Arctic Circle and the North Pole.

The more Nweeia studied narwhals, the less sense they seemed to make.

One spiral tooth projects through the upper lip, jutting nine feet out from only one side of the male’s head. It is a tooth, not an antler with the sex-based size differences well known in the animal kingdom.

Another tooth remains embedded in the other side of the narwhal’s mouth, an asymmetry not found elsewhere in nature. Male narwhal embryos have eight pairs of teeth in their developing mouths, but only two pairs form after birth, with one pair forming the tusks. Usually only one of these teeth becomes the signature tusk.

The world of narwhal research means expeditions to the northern tip of Baffin Island, where Nweeia perches on ice floes or at shore-based camps, dons a dry suit to wade in 36-degree water, braves 120-mph winds, and watches warily for polar bears. Early in his 14-year career of arduous expedition, Nweeia and colleagues discovered that the narwhal tusk is the structural inverse of a human tooth: It has a rigid rod in the center surrounded by a flexible outer layer that contains porous tubules.

“These things all fly in the face of every rule and property that one would learn about teeth, if one were to go to dental school,” Nweeia said.