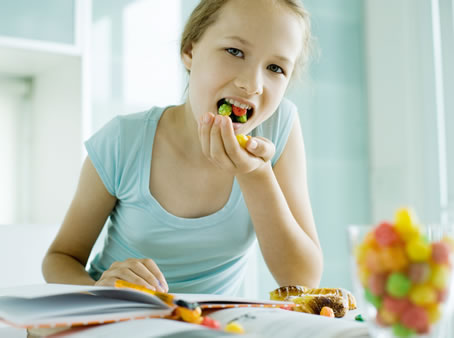 As we know, sugary foods and beverages can lead to cavities for ourselves and our children. When schools limit these types of snacks at school, parents are better able to keep and eye on what kids are consuming and make sure that they care for their teeth accordingly. Thanks for visiting us at Saddle Rock Pediatric Dentistry of Aurora, CO.

Elementary schools are less likely to sell unhealthy snack foods and drinks if school districts or states have rules that limit the sale of such products, a new study finds.

However, more than three-quarters of public elementary schools in the United States are located in a state or school district that does not limit the sale of items such as sugary drinks, salty snacks, candy or high-fat milk, according to the research published June 10 in the journal JAMA Pediatrics.

For the study, researchers examined the types of foods and drinks offered by schools nationwide between 2008-2009 and 2010-2011. Candy, ice cream, cookies and other sweets were sold by about 32 percent of schools in areas where both school district or state policies limited the sugar content of snack foods, compared with 43 percent of schools where there were no such policies.

However, the sale of sugary beverages by schools was not affected by state bans — especially in the South — where sugary drinks were sold by one-quarter of schools in states that banned the sale of the drinks in schools.

The study was funded by the Robert Wood Johnson Foundation through its national research program, Bridging the Gap.

“We found that states and districts can influence the types of snacks and drinks sold at school,” study lead author Jamie Chriqui, an investigator at Bridging the Gap, said in a foundation news release. “These policies can go a long way in helping kids have healthy choices during the school day, but more states and districts need to get strong policies on the books to have a meaningful impact nationally.”